SubbyFinder is an app to help consumers find tradespeople quickly. Like many new app ideas, SubbyFinder was inspired by Uber. The Uber to hire a tradesperson. Uber is indeed an excellent app, and they nailed the UX. But hiring a tradesperson is quite different to hailing a cab!

“The Uber for tradies!”

The premise of the app is to find a tradesperson in the event of an emergency, or job that requires a rapid response. In an ideal world the user would open the SubbyFinder app to a map with tradesmen circling around their area in close proximity, eagerly awaiting a job request. In pre COVID19 times, common sense suggested the likelihood of this scenario eventuating would be pretty slim, but more on that later.

In September 2018 I was tasked with redesigning the billing for tradespeople. Originally tradespeople were to be charged $0.99 for every lead they responded to. Charged immediately for each lead, transaction fees would eat significantly into the lead fee. So we designed a fortnightly billing system to help improve margins and make transaction management easier for the end users.

A Chief Operations Officer was hired and he ran over the numbers for SubbyFinder, and financially it did not look like a viable product. At $0.99 per lead, each customer would need to have at least 30 leads to make the product profitable. But 30 leads would not be desirable for anyone. A customer would not want to sift through that many leads and nor would a tradesperson want to compete with that many.

Further to this, there was already a lot of well established competition in the marketplace such as HiPages, Yellow Pages, Goodwork, Workyard and Airtasker. We would have a difficult chance of being successful (in pre-COVID19 times) if there was not a strong point of difference.

We did not just want a product that was just about acquiring users – it had to be profitable too. So just two weeks before the launch date, we stalled the project until we could come up with a better idea.

With one of the Senior UX designers, I conducted a few workshops on what features could put the SubbyFinder app in a more competitive position. I also conducted research with a Typeform survey and reached out to every tradesperson I knew. Whilst I only had a small sample size (just 5), I was able to determine some pain points for tradespeople. 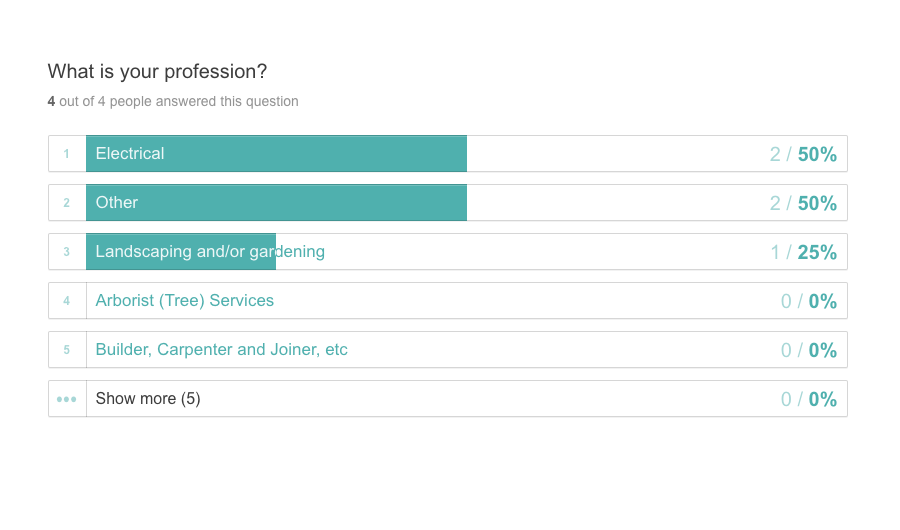 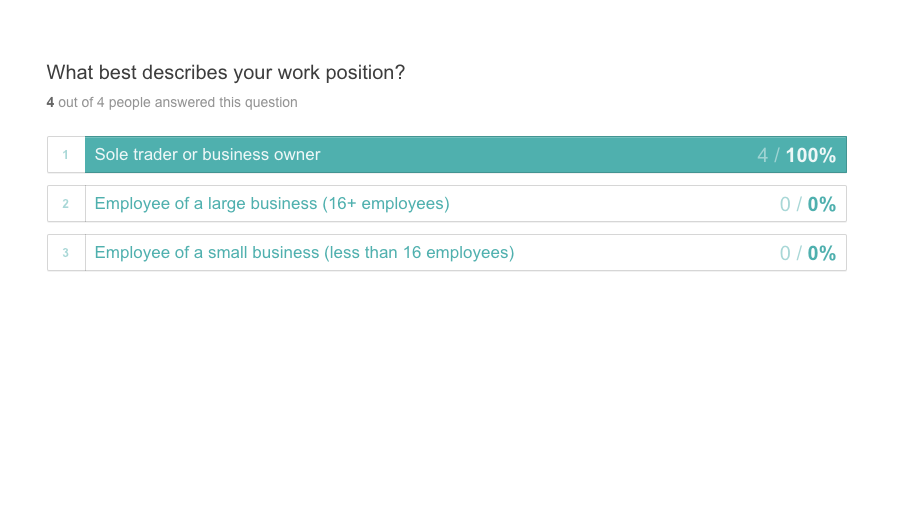 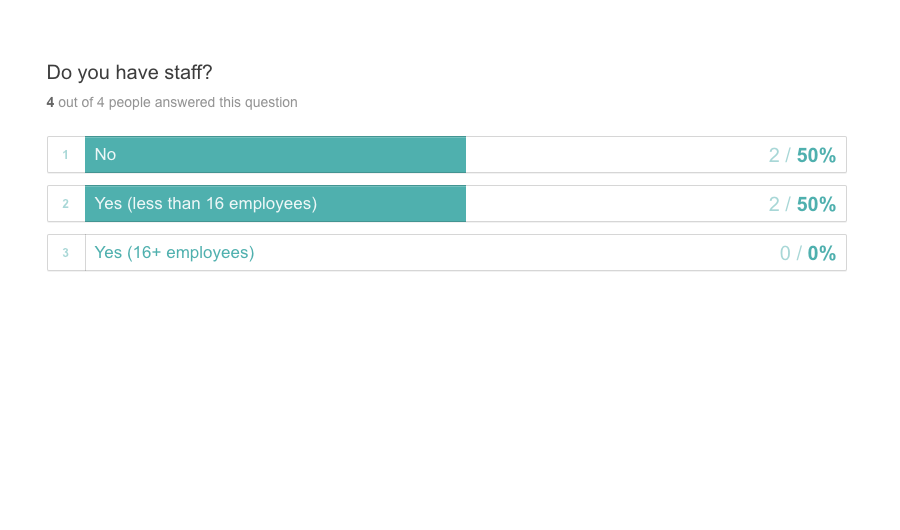 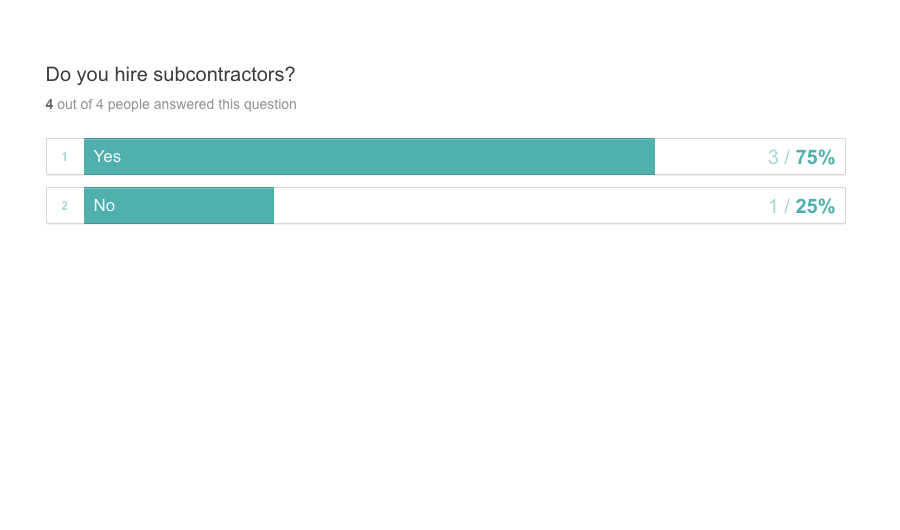 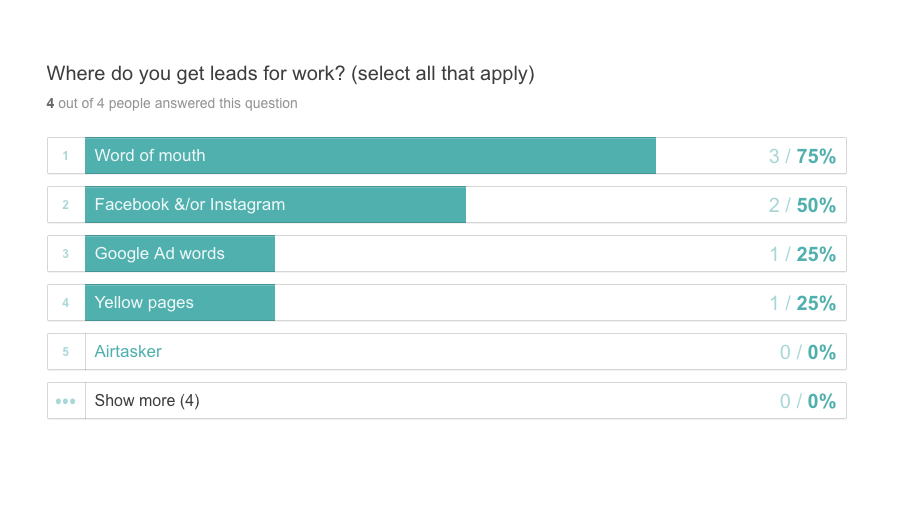 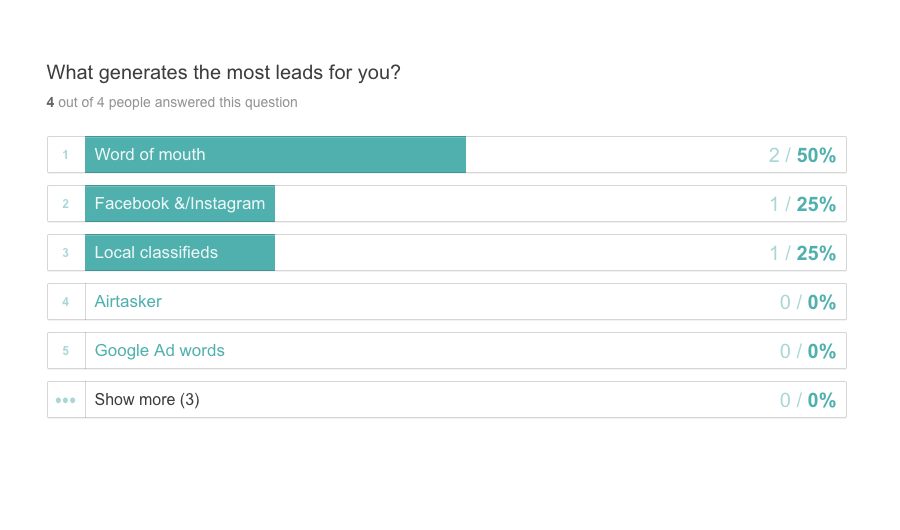 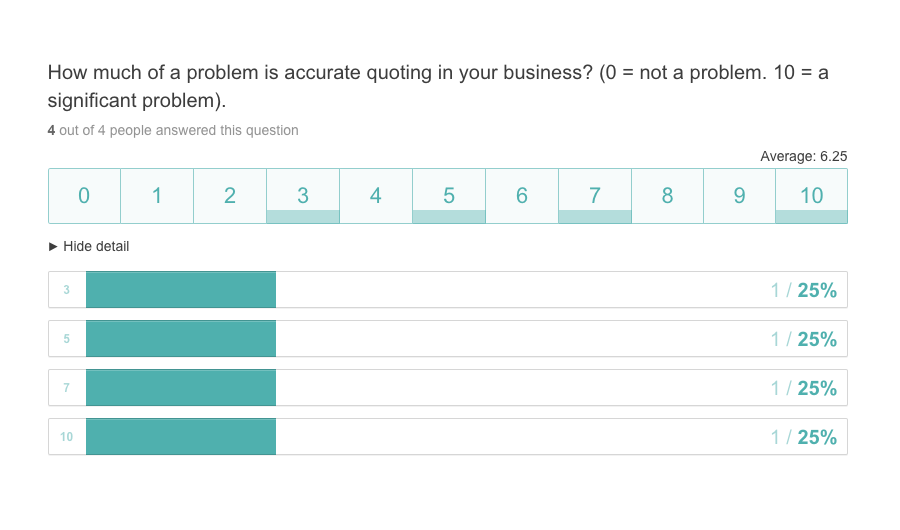 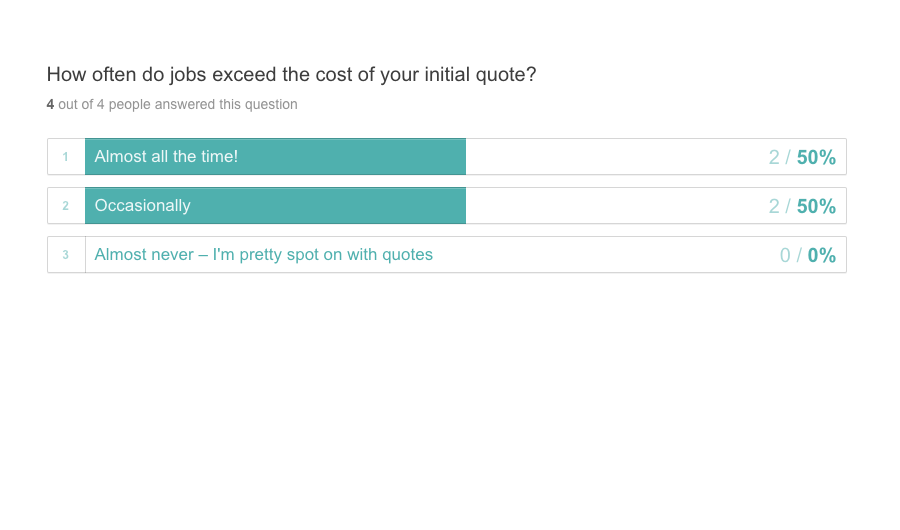 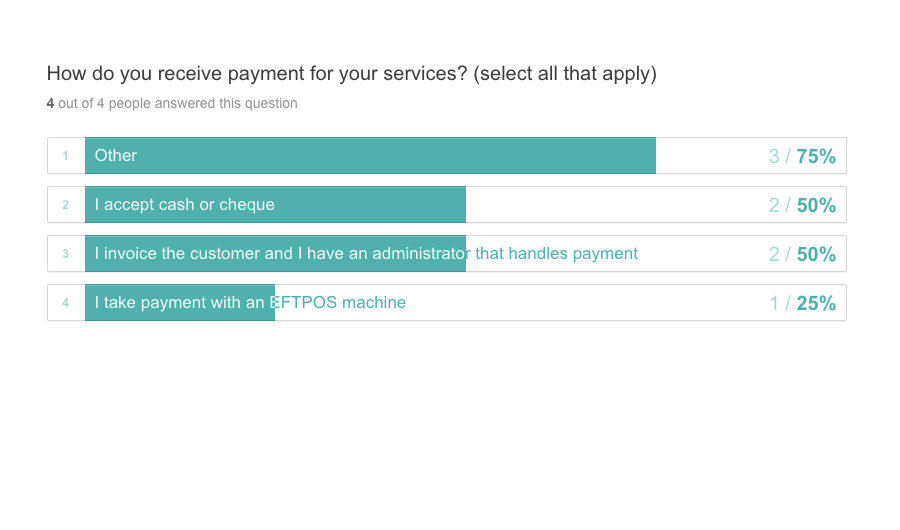 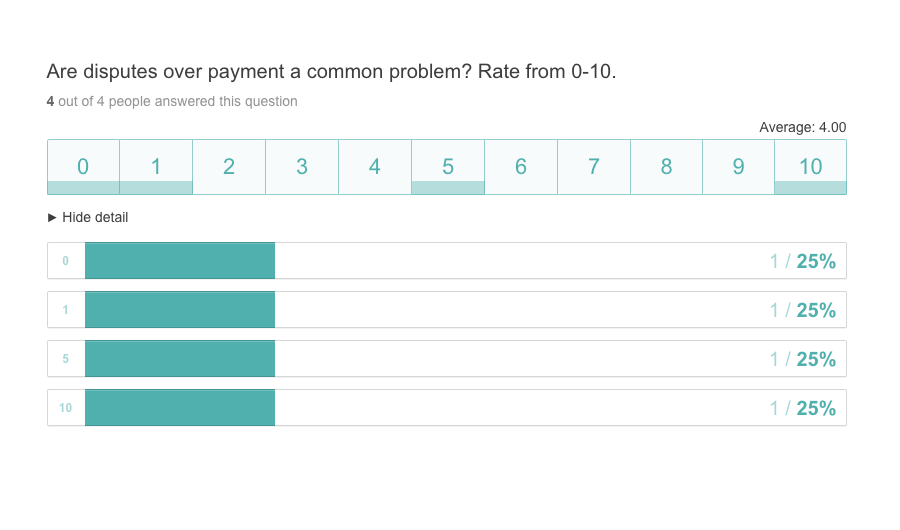 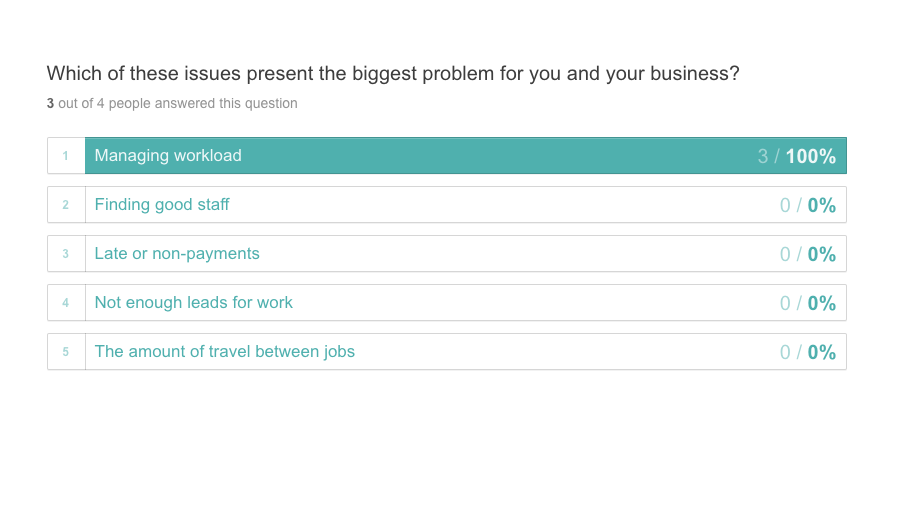 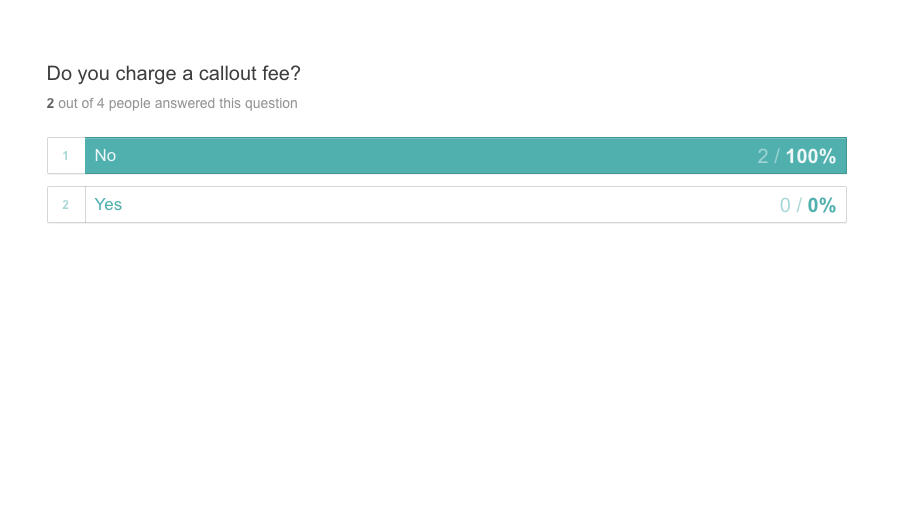 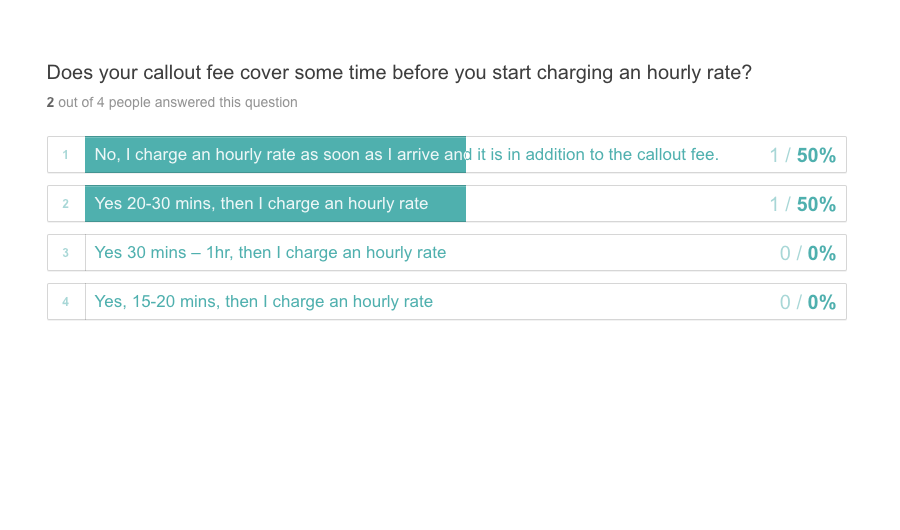 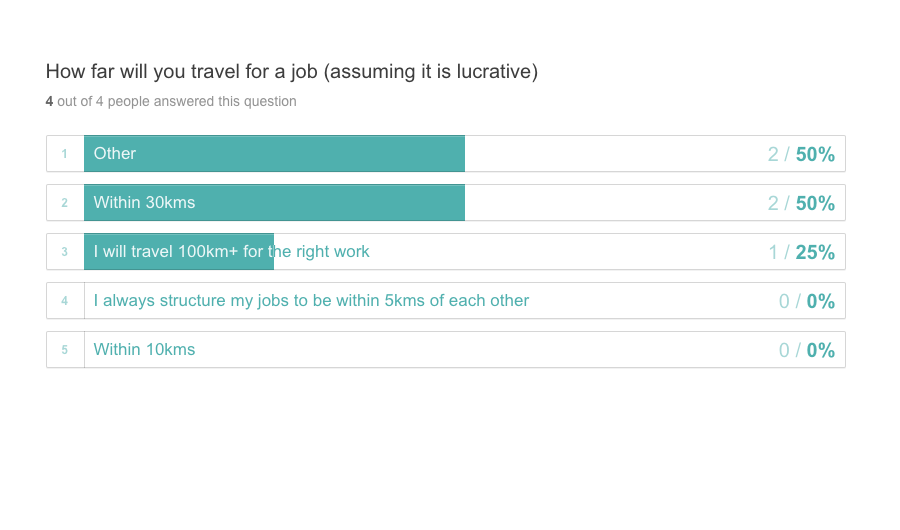 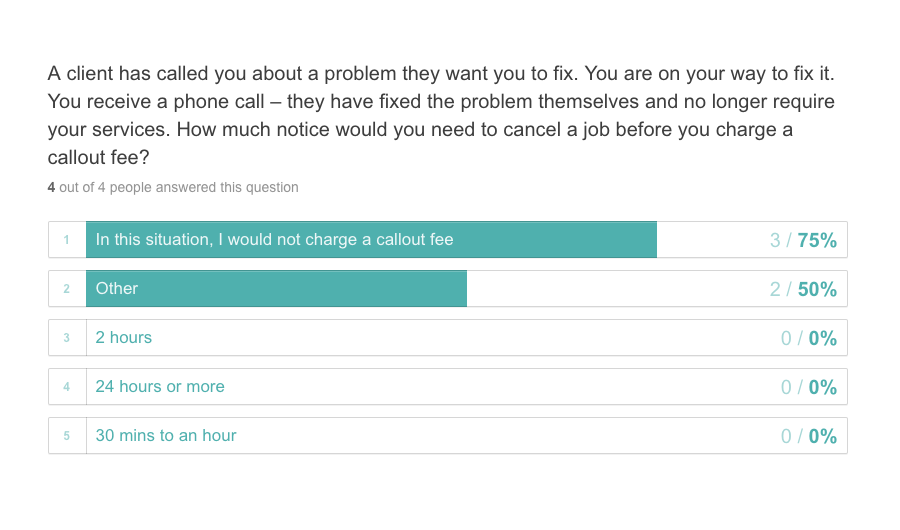 Finding leads did not appear to be a significant issue, but time management and quoting did.

I put forward the idea of incorporating quoting tools and scheduling into the app. The Technical Lead felt nervous about this, quite rightly assuming this would be a big job. And so, the design team waited for further direction.

After much work behind the scenes with investors, the original founder of SubbyFinder was bought in as a consultant. He agreed that the product needed further work and suggested pivoting the product into a social media platform.

He had noticed a large uptake in social media use by tradespeople. He noticed tradespeople using Linked In, Facebook and Instagram for business. He felt tradespeople needed something like Linked In, but tailored towards blue collar work.

Do tradies use social media?

I too had noticed the rise of trade work on Instagram, and thought this could be a niche ready to be exploited. Wanting to add to this anecdotal evidence, I spent some time on my commute to research trade related hashtags on Instagram. 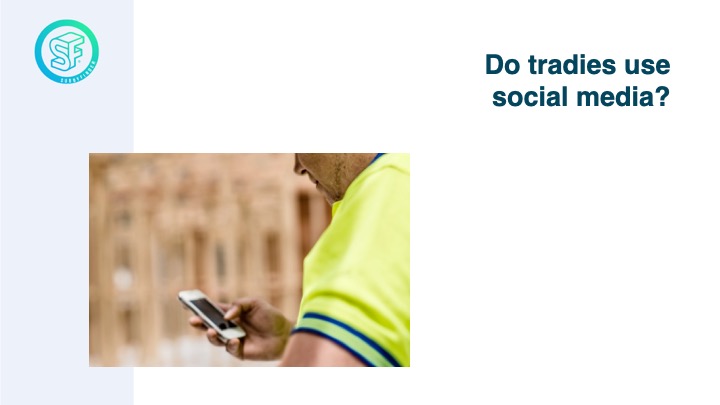 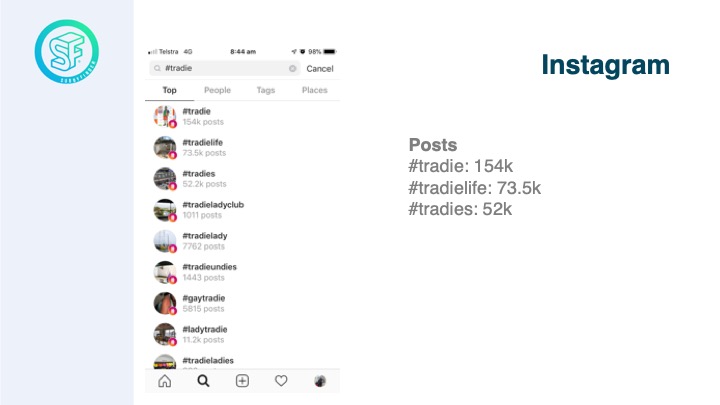 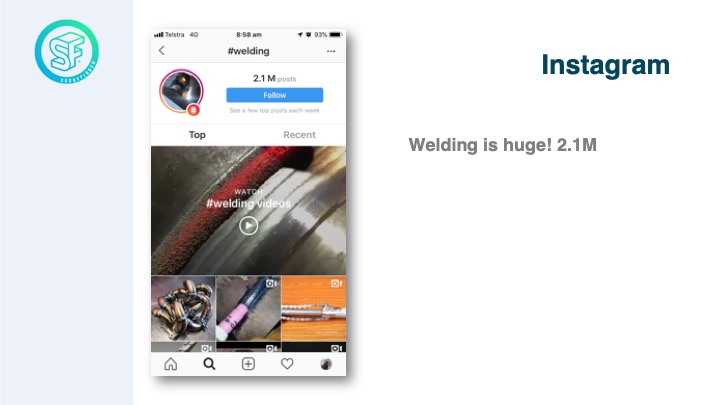 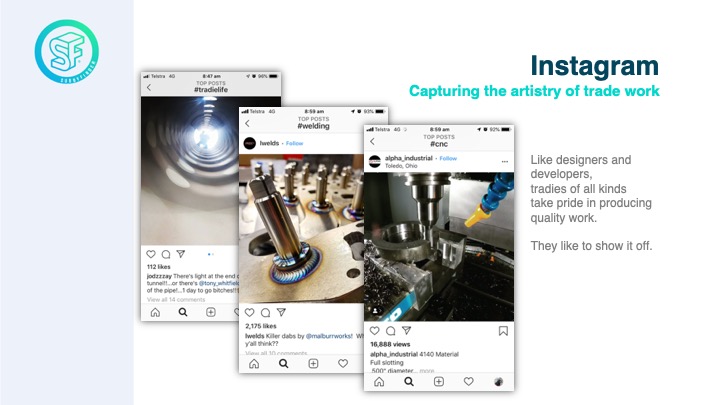 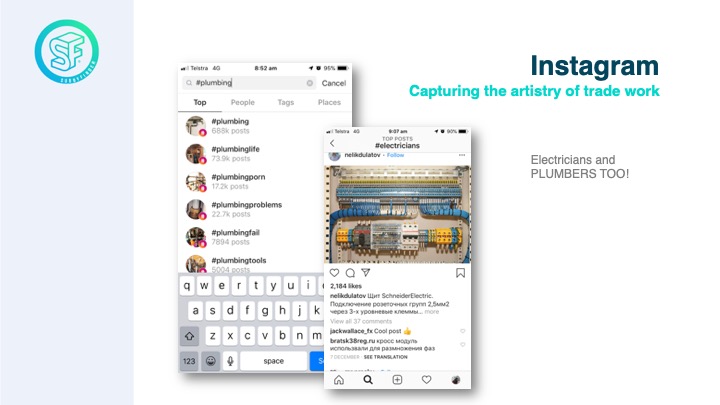 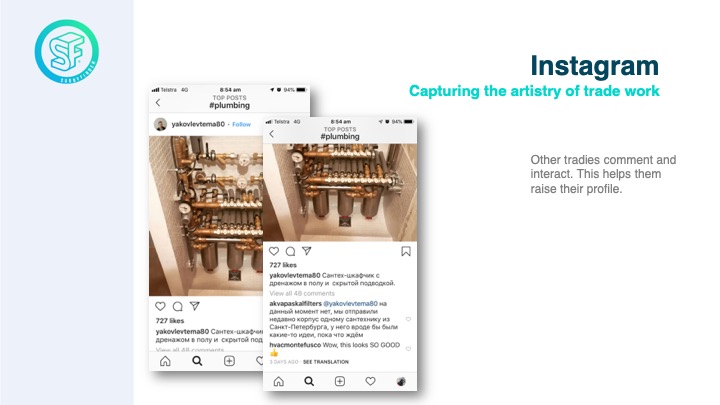 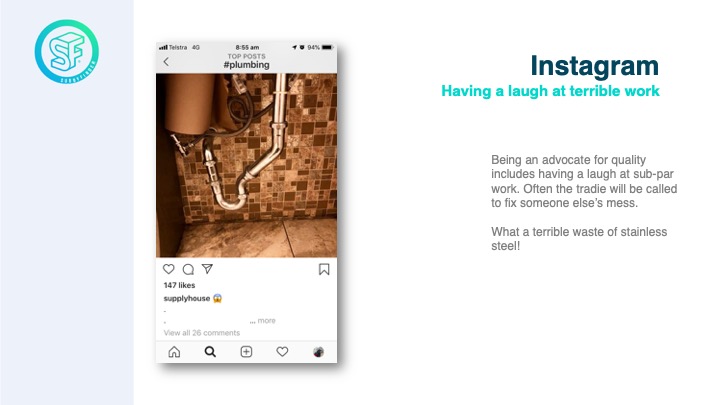 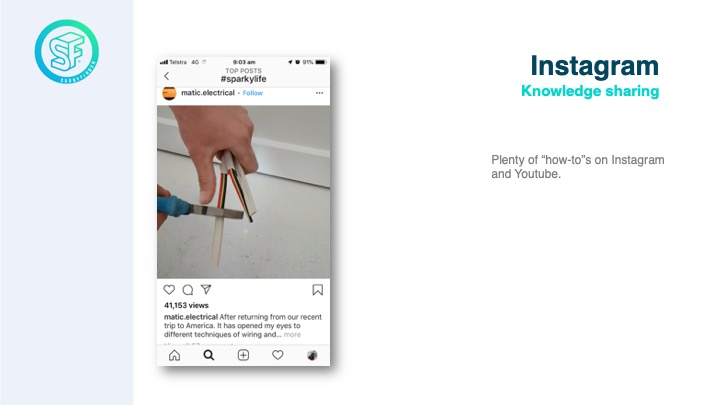 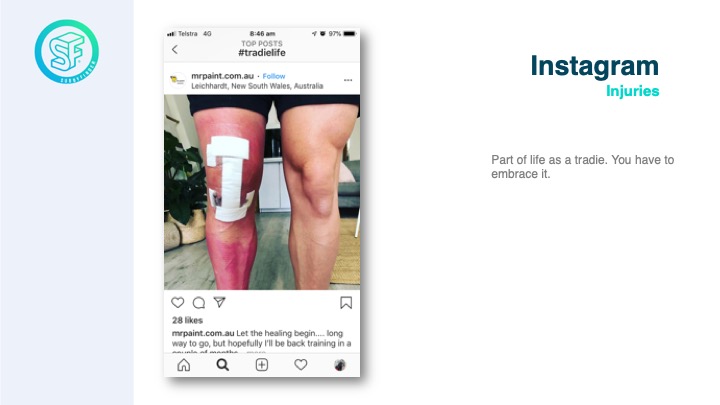 I enjoyed the amusingly laconic style of tradie posts and noted how prolific tradie posts were. The founder was on to something. I knew that his idea would be met with skepticism though, so I compiled the posts into a Powerpoint presentation and showed it to the rest of the team, recounting my own experiences as a tradesperson (20 years ago). This really helped get buy-in from team members.

The “Linked In for tradies”

With the help of a Senior UX designer, I facilitated a series of workshops to nut out the features. The first one was a feature prioritisation workshop, putting the existing features up against new social media features. With the developers we mapped out what we thought was high value vs complexity. We decided to keep most of the original app’s features, but some were removed. 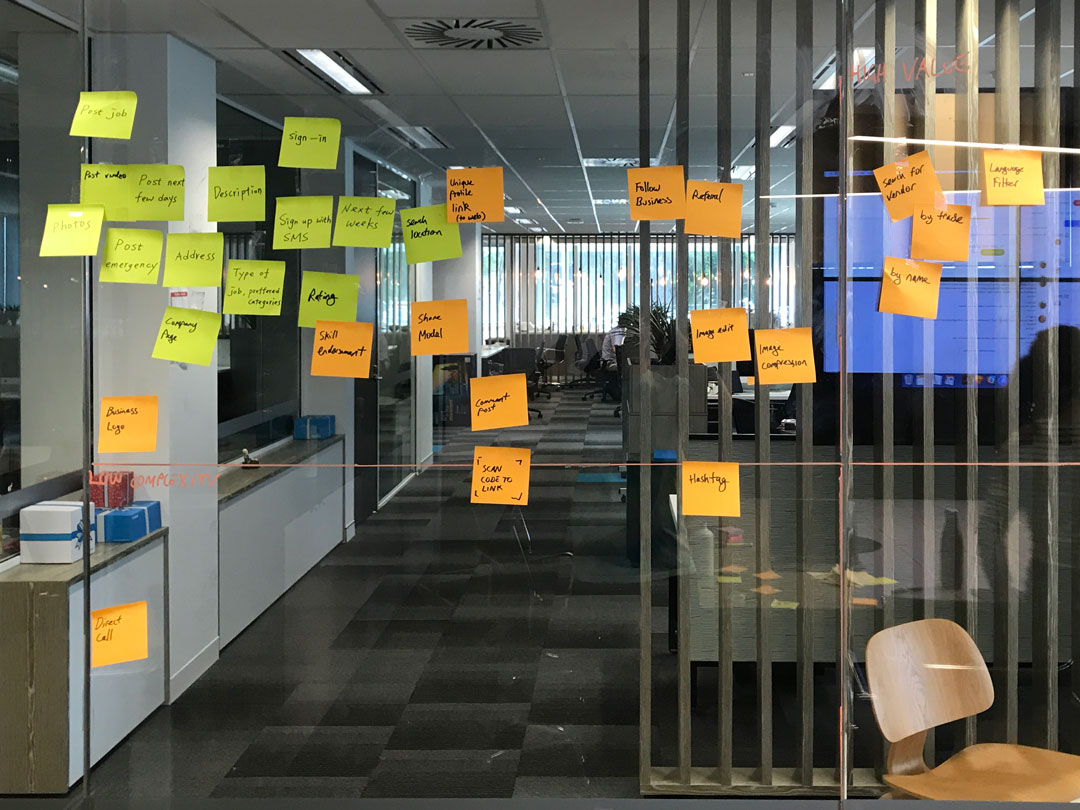 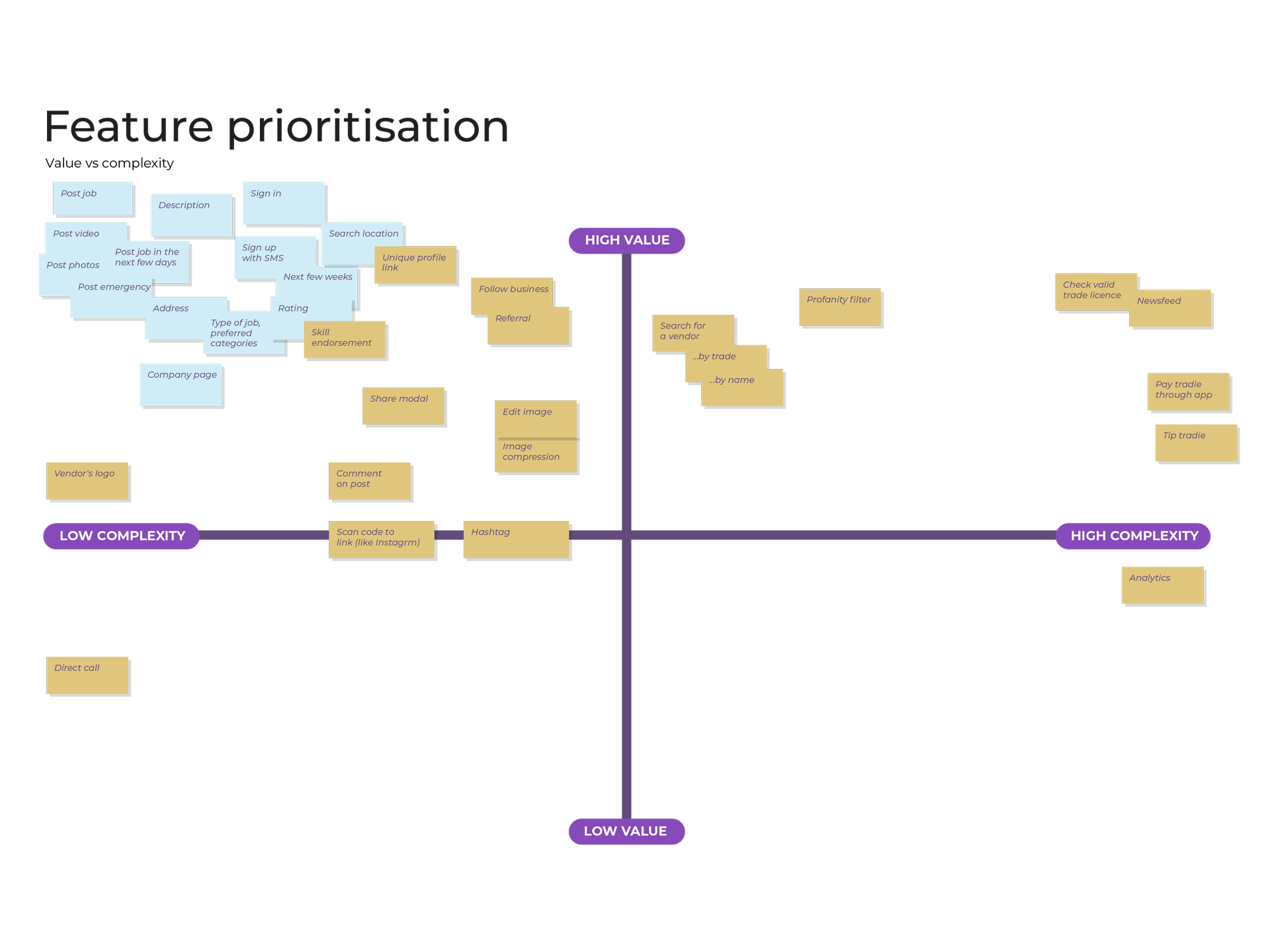 From here I got one of the junior designers to create a list of features from social media platforms’ newsfeeds.

Now we were starting to form an idea of what features to include on the timeline/feed, it was time to consider just what that feed would look like. The Senior UX Designer facilitated an affinity mapping session with various colleagues to put her in a better position to design the ideal feed. Whilst we were not necessarily the end users, it did help pave a way forward. In the end we decided a feed that allowed for a mix of text and images (similar to Facebook and LinkedIn) would be best. We did not want to force users to upload an image with every post.

One big challenge we now had was to allow the tradesperson to post a job as well to find sub-contractors. It is called SubbyFinder after all! I got one of the Junior UX Designers to map out the architecture before we proceeded to editing the wireframes.

The groundwork was laid. Now for the Wireframes. These were handled by a Senior UX Designer.

So, what happened to the app? Where is it now?

As it happens in startup world, the project ran out of funding prematurely. That’s a shame because with COVID19 disrupting work, there could be a strong business case for the app. The startup ceased trading in September 2019.